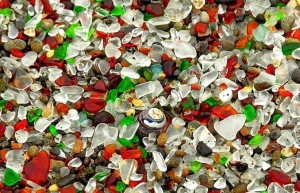 Glass Beach is a popular northern California tourist attraction, and its claim to fame has been that it is “one of the most abundant sources of sea glass in the world.” Soon, though, all that glass will have been picked over by visitor-thieves making off with baggies, buckets, and trashcan-sized canisters full of the stuff.

It sounds so mythic and dreamy, sea glass, but really it’s human refuse made smooth and gorgeous by the salty tumult of our churning oceans. Until the 60s, the Fort Bragg beach had been a toxic garbage dump, where people threw their soda pop bottles and other trash, but once the site had been cleaned up they returned in droves to collect the alchemized artifacts—unmindful, as they were, of the posted signs prohibiting this activity.

I am not so much troubled by the origins of Glass Beach as I am by the me-mine clamoring of those who seem to walk in never-ending sleep. We humans tend to make a heavy-footed mess wherever we go, and this has always been true, but one can only hope that we will awaken before mother earth gives up on her seemingly futile efforts to clean up after our messes.

2 thoughts on “And if we cannot awaken?”